The GCD is a separate, free software product that calculates the differences between digital elevation model (DEM) rasters. In the latest version of the GCD you can also extract elevations from DEMs or change detection results using polyline ShapeFiles and store them as linear extractions. These are comma separated value (CSV) text files stored within the GCD project folder structure.

The import process reads this folder structure and discovers all the linear extractions that have been performed, importing the elevations into a new cross section viewer database. The whole process is automated and there are no inputs or decisions required. It simply creates a new cross section viewer database each time that the import is run and stores it in a folder within the GCD project called Exports. The fact that a new database is created each time the tool is run is important because it allows you to continue to evolve your GCD project and continuously generate new snapshots of the project as separate cross section databases. 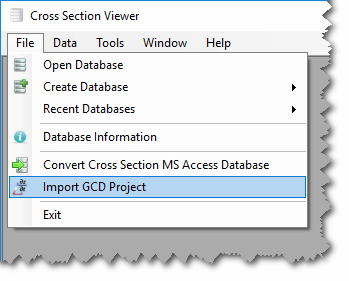 See the GCD help for generating linear extractions for more information on how to generate GCD results that work with this feature.